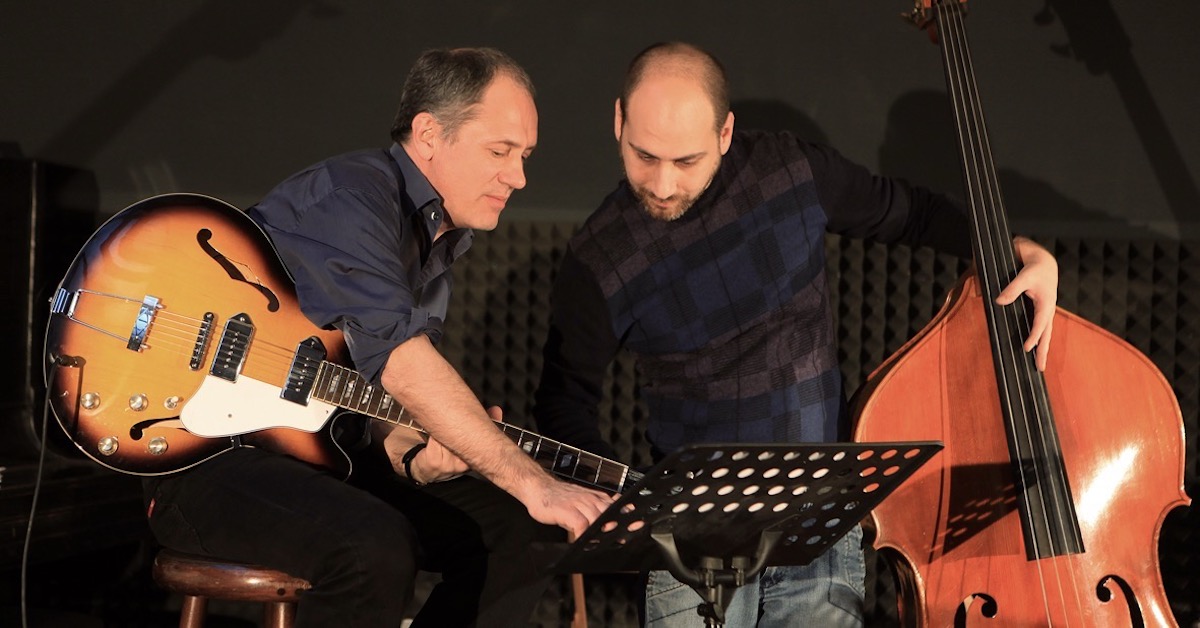 Can you really ‘learn’ to play jazz? Yes, you can – and that’s exactly the idea behind the Jazzschule Berlin. Founded in 1999, we will celebrate our 20th anniversary in 2019. Here are some milestones along the way:

The Jazzschule Berlin was founded in 1999. It was initially located above a club for jazz, theatre and cabaret in Kastanienallee in Prenzlauer Berg. The school moved into the three floors above the club which had been used as a storage area, complete with brick walls and a freight lift. The private lessons and group courses were taught by various musicians, including Claus Rückbeil, director of the school Jazzschule Berlin. “While performing as jazz musicians in Berlin and elsewhere, we noticed that people interested in this music wanted to learn more about it and jumped at the chance of doing workshops.”
[toggle_item title=”A taste of the Wild West in the East” active=”false”]

The club was forced to move because of noise regulations, but the jazz school was allowed to remain. In the same month we were notifed that no legal owner could be ascertained for the building in Kastanienallee. In other words, this meant that we had no one we could pay our rent to! All of a sudden the building was ownerless and the jazz school existed within a grey area of the law. In the early days of German reunification this was not uncommon in the former East Berlin. There was rather a feeling of being in the Wild West in Kastanienallee at that time – particularly with regards to running costs. BEWAG, the responsible electricity company, was unable to discover from where the power for the building was coming from. Was it via underground cables that a previous owner had tapped from neighbouring buildings? This meant no rent, no bills for running costs and no electrical costs for the aproximately 100 square meters per floor for one-and-a-half years. The Jazzschule Berlin project had begun its existence as a real live squat!

From Kastanienallee to the ufaFabrik

In 2001 the new owners suddenly knocked on the door. Amazed as they were, they were not unfriendly when they said to us: “Hello, we’re the new building owners. Who are you?” It quickly became clear that the Jazzschule Berlin needed a new home. At first it was relocated to the ground floor of a building full of musicians in Choriner Strasse. The ensemble rooms were located elsewhere, for a time in a school at Arkonaplatz. Five years later came our next move. In 2006 the Jazzschule relocated its quarters to the top two floors of a gherkin factory, in a street by the name of Am Tempelhofer Berg in Kreuzberg. Finally all branches of the school – ensembles, vocal groups, improvisation courses and offices – were once again under one roof. In 2011 the building unfortunately changed owners and the Jazzschule had to move again, to the ufaFabrik in Tempelhof.

It’s the feeling that counts

In 2004 the Jazzschule Berlin began its distance learning modules based on the tried-and-tested principle of tackling the practical aspects first: hearing and playing, then the theory. Since 2008 the “Basic Course Jazz Standards” has been state certified as a further education/ professional training programme.

The Jazzschule Berlin has never been a music school where only theorical knowledge is taught. Most students are looking for a platform, searching for a connection to a scene with like-minded individuals and musicians with whom they can perform. This remains the principle behind success story of the Jazzschule Berlin to this day: although the actual lessons are important, it’s the feeling between the musicians that really counts. And that’s exactly what we’ll continue to do for the next 20 years.